Tom Hardy is a British actor who portrayed Eames in Inception, Bane in The Dark Knight Rises, and an unknown role in the upcoming film Dunkirk.

Hardy grew up in East Sheen, and attended drama school. He appeared in Band of Brothers, then made his film debut in Black Hawk Down (alongside William Fichtner), before going on to more film work. In 2004 he appeared in Layer Cake alongside Tamer Hassan, and in 2008 in RocknRolla alongside Tom Wilkinson.

In 2016, Hardy was nominated for the Academy Award for Best Supporting Actor for his role in The Revenant. 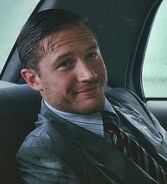 Hardy as Eames in Inception.

Hardy as Bane in The Dark Knight Rises. 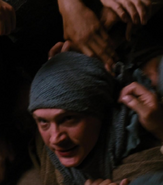 Hardy as Bane in The Dark Knight Rises

Hardy in Dunkirk
Add a photo to this gallery

Retrieved from "https://chrisnolan.fandom.com/wiki/Tom_Hardy?oldid=7350"
Community content is available under CC-BY-SA unless otherwise noted.