Christian Bale is an actor who portrayed Bruce Wayne in the Batman films, and Alfred Borden in The Prestige. He also played Borden's twin Bernard Fallon in the latter film.

Bale was born in Wales and grew up there and in England. As a child he acted, appearing in Empire of the Sun in 1987. He continued his career, notably gaining attention when losing a dramatic amount of weight for his role in The Machinist. In 1996 he starred in Portrait of a Lady, alongside Martin Donovan, in 2002 he starred in Equilibrium, alongside William Fichtner, in 2007 in I'm Not There, alongside Heath Ledger, and in 2009 in Public Enemies, alongside Marion Cotillard. He has been nominated for an Academy Award 3 times; 2 for Best Supporting Actor in The Fighter and The Big Short And 1 for Best Actor in American Hustle, winning an Oscar for his performance in The Fighter. 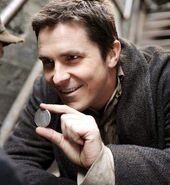 As Bernard Fallon
Add a photo to this gallery

Retrieved from "https://chrisnolan.fandom.com/wiki/Christian_Bale?oldid=7539"
Community content is available under CC-BY-SA unless otherwise noted.